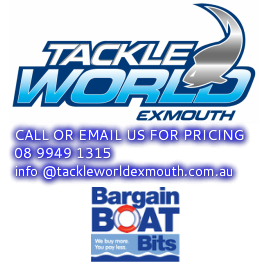 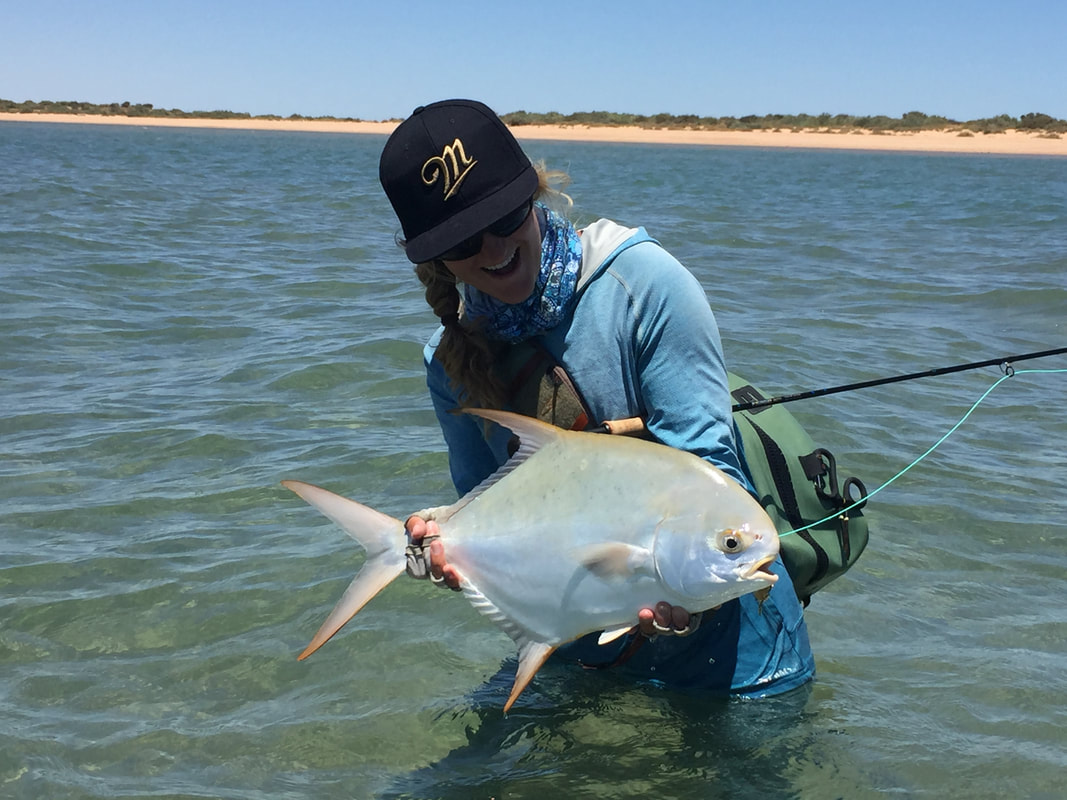 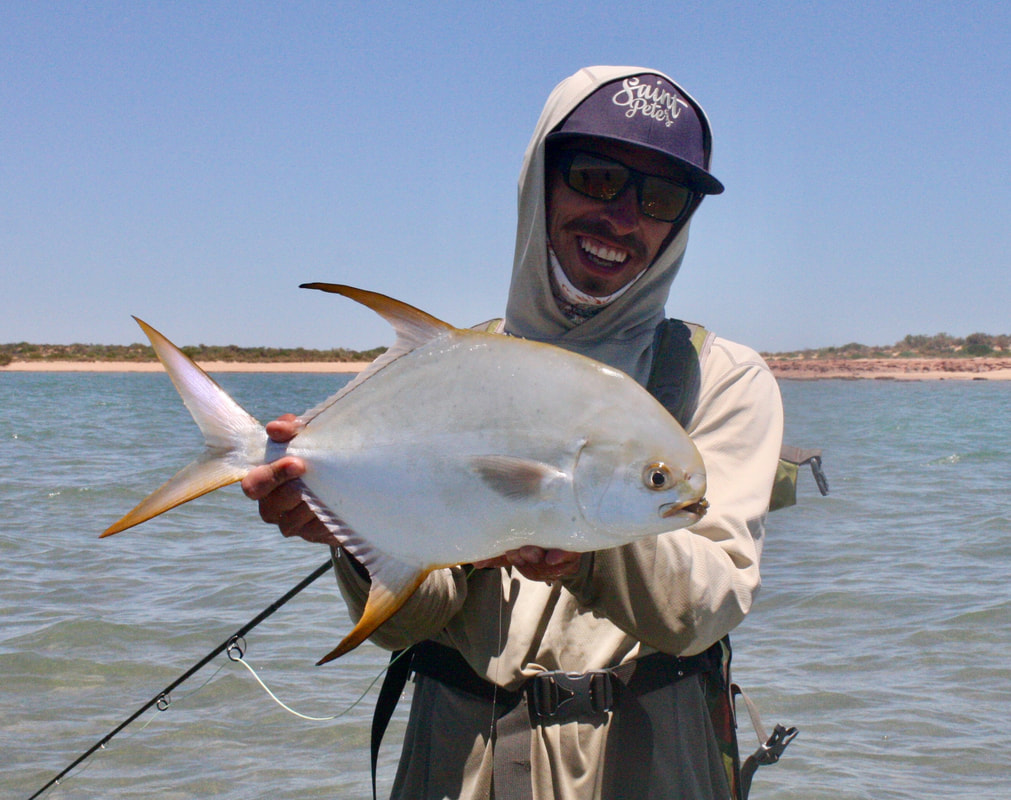 PIC: Katie Knick and her partner Nick with their shore-based catch of a permit each.
​
Tackle World Exmouth Fishing Report week #4618
How good is it to get a mint-weather weekend in November? Brilliant. Yes, it can be a bit breezy at this time of year, but when the weather gods turn it on, the ramps are busy with locals heading out to make the most of the prime conditions.  Having said that, the true locals were easy to spot as they hung close to the ramps mid-afternoon expecting the south-wester to hit without warning.  The most unusual weather pattern this week was the rain though, with a sprinkle that barely cleaned the dust off the roof tops.  The weird weather pattern was a good excuse for those anglers who had no luck, but there were plenty of anglers that had good success.

The gulf was on fire again with reports of squid in all areas that were hungry and in large squads.  If you want success with them, we recommend slow trolling with light gear set on very light drag.  Use a variety of colours and make sure that the boat is out of gear once a hook up is in action and be quick to grab the other rods before the jigs hit the bottom.  Try the weed beds and sandy areas adjacent to the weed beds.  It’s great fun for young and old and extremely tasty if your results are positive.

The rock lobster continue to be high on the list for anglers too this week with some crystal-clear conditions with very little tidal movement coupled with calm weather.  These conditions also made it perfect for spear fishing anglers and many blue and white flags were flying in the gulf during the weekend.  Coral trout were found to be popular in photos, along with a few blueys.  The warmer weather is certainly helping the water temperatures to rise and entice more people to grab a spear gun and target something differently.

Poppa George is a name well known in the billfishing scene in Exmouth, particularly after he fell overboard while fishing solo two years ago and spent over 5hrs in waters far out from shore.  The keen Kiwi is back out there again in his new boat and shredding the waters with some incredible statistics on the blue marlin.  Of course, he is far more careful these days with personal safety when fishing alone, but with the figures he has been getting of late, we reckon all his mates will be wanting to join him for future trips.  Many boats in the fleet out chasing the blues have been having multiple encounters daily and we are looking forward to hearing some more records being broken in the coming weeks.

The fly fishing scene has been awesome with several incredible catches by local and visiting anglers. Katie Knick and her partner Nick have continued to wade the flats and are enjoying the warm waters that have been holding the much sought-after permit.  Both of them have landed these snub-nosed dart from the shore now and are pictured this week. 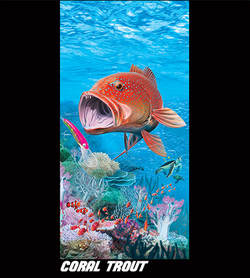 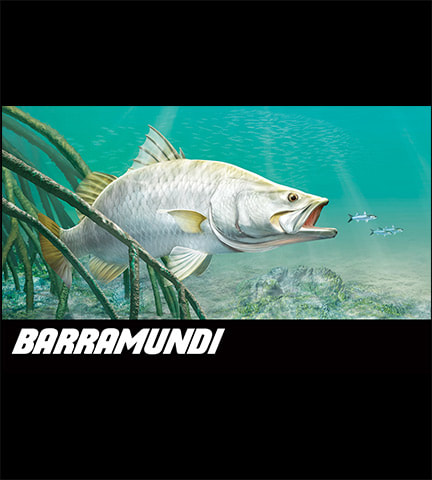 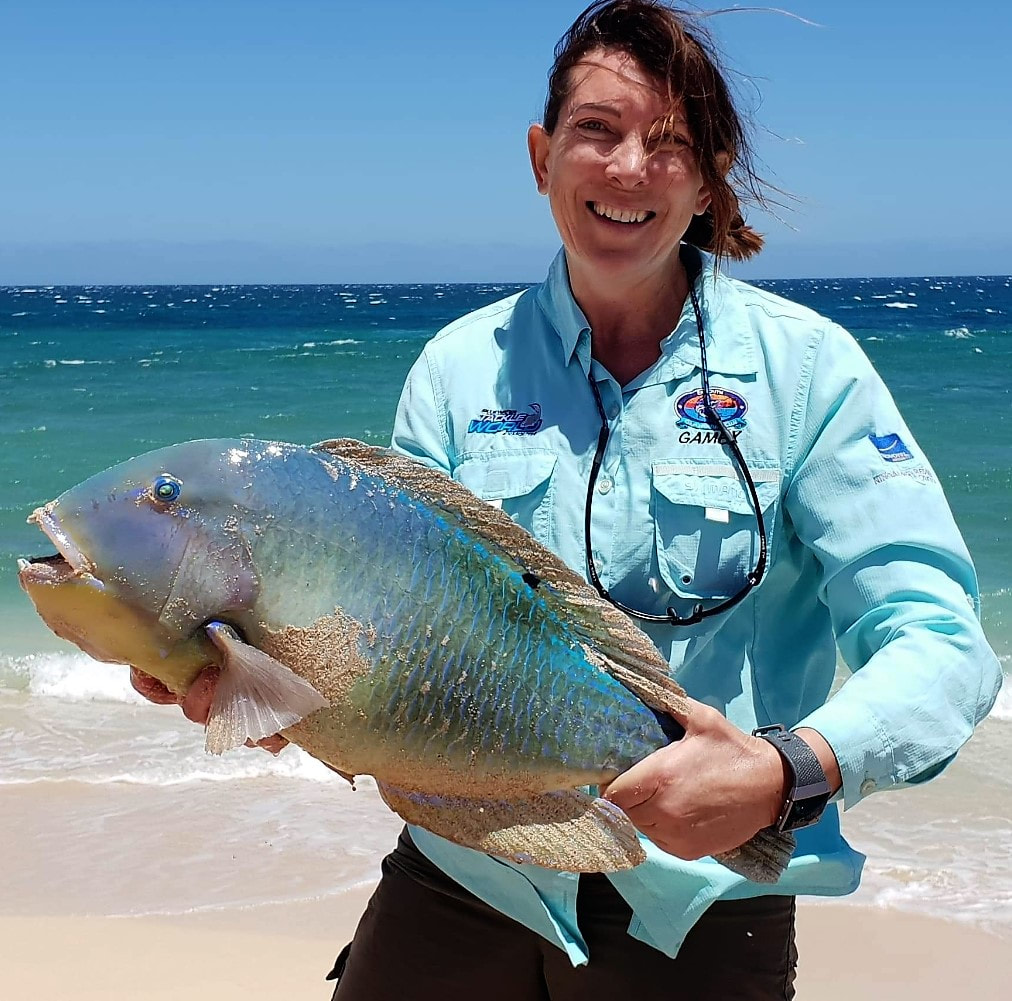 PIC: Deb Foster with her bluebone caught from the shore.

Tackle World Exmouth Fishing Report week #4718
The shore-based angling this week has been varied, with a mixed bag of fish and seafood coming in.  Deb Foster and Lexi Taylor headed to the tip of the cape in search of a few hours of fun using medium sized spin gear and crab for bait.  The girls were specifically targeting the tasty black spotted tusk fish (bluebone) and were extremely pleased to be successful in a short time frame.  The weather was a bit breezy, but thankfully it was behind their backs and they used a paternoster rig to get the bait floating mid water.  The result is pictured this week with Deb holding the colourful fish for a pic prior to iki jimi and placing in an ice slurry.

The whiting has been the other continued shore-based fish that has been prevalent in the last few weeks.  In the past most people thought whiting was only in winter, but they are here year-round and the summer time is great for targeting them with very few people fishing from the shore compared with the colder months.  Prawns is your best option for whiting, but if you want a bit more fun and action, try the small Jackson poppers.  The poppers simulate a prawn and the whiting love it.

Queenfish have been showing up along the gulf beaches near Learmonth Jetty. Anglers have been using bait jigs to catch the hardy heads there and using them with success on the queenfish.  You can also expect to catch other larger predatory species in this area such as various trevally species including gold spot, giant and golden.  Of course, we always recommend having a squid jig in your tackle box at Learmonth and there has been a few of them about lately too.

The sailfish have continued to fire in the gulf with reports of fish feeding on bait schools and some boats getting up to ten in an afternoon session.  The weather has been a bit average of a morning in the gulf, but the afternoons have been calming off to allow a good window for getting out and targeting the sails.  The bait at King Reef is still a favourite for the sails and we do wonder if the sails will come closer in future years with this structure in place.

The EGFC annual Christmas party is on December 9th from 3pm with a bouncy castle for the kids and sausage sizzle and burgers.  Make sure you rsvp for catering, especially if you have kids because Santa may be visiting? 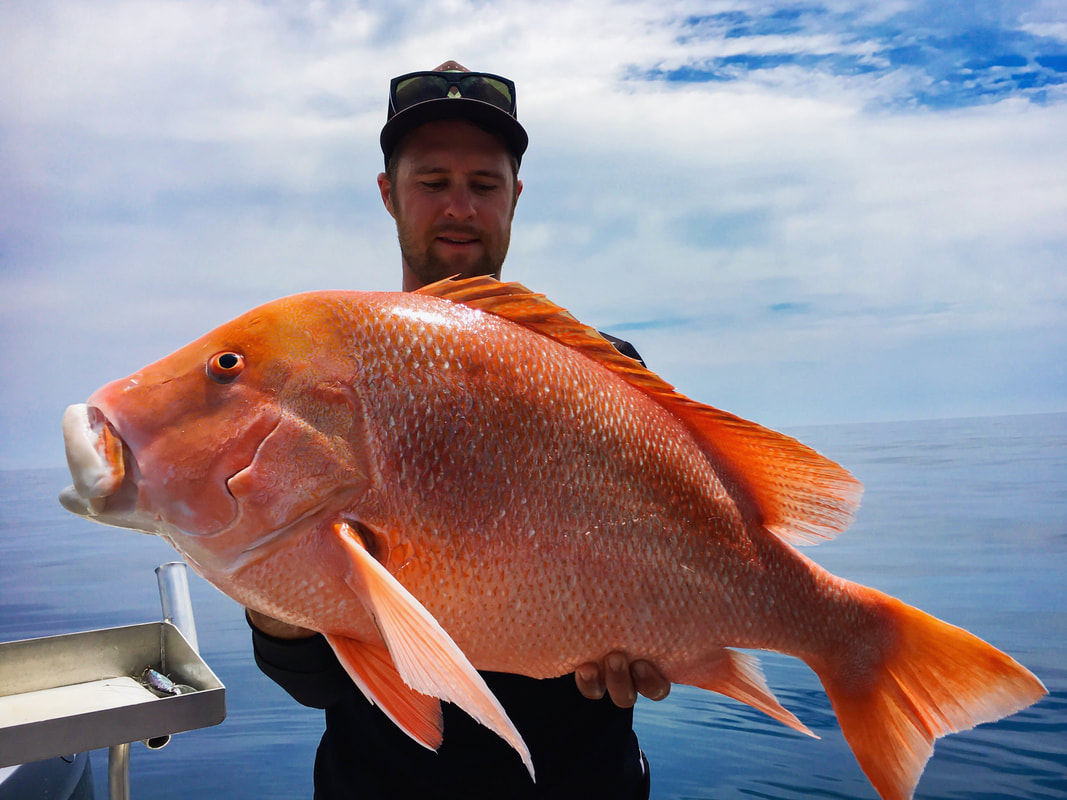 ​PIC: Quade Kitson with his PB of a 9.5kg red emperor caught off the Muiron’s.

Tackle World Exmouth Fishing Report week #4818
Summer is coming, but it is still chilly at times.  The warmer waters definitely bring on the mangrove jacks feeding hard though, as many locals have noticed in the last few weeks.  The jacks can’t pass the old mulie bait, especially when it is floating down in to their territory.   Of course, if you are fishing deeper water, you can use a small sinker, but try and have it as lightly weighted as possible.  The fresh mullet is also a good option if you are handy with the throw net.  Keeping the mullet alive in the simple floating live bait keeper is a good option and you can easy release any you haven’t used at the end of your fishing session.  Please remember if you are walking any of the creeks to be aware of stonefish that we do get in the area.  Good hard sole water shoes are great, but you still need to shuffle rather than step in water to avoid a spine through your foot.

Mud crabs are delicious and so are the blue manners, which we are lucky to get both in this area. If you have never read up about the mud crabs, check out the Fisheries website for interesting information.  Remember that the minimum size for the green mud crab that we get here is 150mm.  It is thought that wild mud crabs grow to around 10 cm in width in about a year and become sexual mature in about two years. The typical life span of a mud crab is thought to be three to four years.  They are aggressive eaters and feed well here in our healthy gulf.  They are best eaten fresh, so remember to only take what you need and stay within the bag limits.

Quade Kitson was fishing off the Muiron Islands recently and thought he would invest some time to search some new ground.  It certainly paid off when he caught his personal best red emperor weighing 9.5kg! What a ripper. These fish are sensational to eat and have so much meat in the wings and head too. Make sure you make the most of your catch and use it all to get every tasty bit you can from this tasty fish.

Gary and Sherrell Carter are here from the USA for two weeks of fishing charters to target various game species including billfish.  The two of them are avid anglers that have achieved many records over decades of fishing.  The IGFA recognised the couple with an Outstanding Achievement Award in 1999 for catching the first known Royal Slam made from the same vessel where they caught all nine billfish species.  Gary is a Trustee for the IGFA now and the couple travel to some of the best fisheries in the world.  It is great to see they have chosen Exmouth and we hope to show them the amazing fishery we have. I’m sure we will have some pics of them in the coming reports. 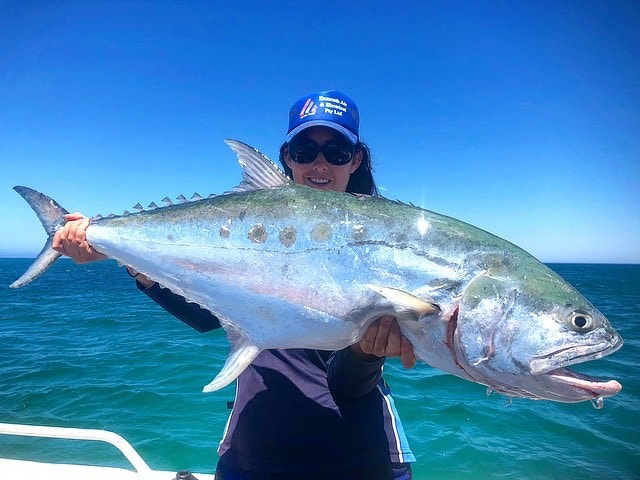 PIC: Hayley Dellar with her incredible queenfish caught off Exmouth..​
Tackle World Exmouth Fishing Report week #4918
Exmouth locals really know how to be festive at this time of year and it’s great to catch up with so many familiar faces at various functions in December.  The annual EGFC Christmas party was a hit for the youngsters with the PCYC bouncy castle set up for the afternoon.  The southerly breeze kept it cool for all and allowed for some people to cut the fishing day short by attending.  The food was awesome and the club would like to remind members that the next event is the Tantabiddi Camp out on the first weekend after New Years Eve.

The Jackoff is on again for summer. Yes, this little mangrove jack comp is a winner and you could be too by entering at Tackle World Exmouth.  You receive a brag mat on entry and any jack photo on the brag mat is eligible with the winner taking home a cash prize.  In the last few weeks there has been a few 46, 49 and even a 56cm model caught.

Queenfish are an awesome sport fish that can give you a stack of fun with acrobatic leaps and fierce competitive strikes on surface lures.  Hayley Dellar caught a ripper this week and we had to show you all how big they can get, because this one is sensational.  Most locals who catch these, release them and they are not the best eating, but if you want to take one home, make sure you eat it fresh.

Summer whiting have been on the chew again and showing up in big numbers along the gulf beaches.  These are another example of the healthy gulf we have here and the great fresh options we have as residents and visitors to the region.  We do not recommend getting more than enough for a meal so that you or others can enjoy another session catching these tasty small delights.

It’s almost a year since the 1089lb blue marlin was brought in to weigh in Exmouth.  Last week a big black marlin was brought in on the east coast.  This year has seen many, many big blacks caught and released off Cairns.  Yet again, it is great to see this fishery so healthy with increased numbers of big billfish.  We expect there will be some more large marlin smashing lures in the coming months off Exmouth.  With this will also be crews in small and large vessels.  If you’re keen to have a crack, but not sure where to start, drop in and ask any of the staff at Tackle World on any day.  It is achievable in a small boat on a budget, or you can join a charter on a larger vessel, or even join crews in events.  It’s great to get more data each year on these fish that we love to interact with in our waters.
Proudly powered by Weebly